Can Anyone Build Me a Boat?

I would post some pictures about the chores I have been doing in the garden, but it has been raining here, hard, for what seems like an eternity! I think they are saying it is over a foot of rain we have had. There are some amazing sites along the Ohio River and even some of the boat channels.
Maybe soon I can get some more garden stuff done. For now, I am waiting for a little sunshine to dry up all that mud!
Posted by Shawn Ann at 3:07 PM 3 comments:

Hardy Cilantro and Feeling Behind

I had a terrible time with Cilantro last year. I kept planting seeds all spring, summer and fall. I got this little tiny one by the end of the season but it was so pitiful I just left it there, and the thing kept going through winter! And here it is today. Probably one of the fullest cilantro plants I have ever grown! 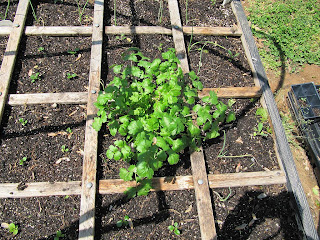 Almost all the beds have something planted in them so far, but much of it is too small to photograph. This one is going pretty good with peas, garlic, spinach, and chard. Doesn't seem like I am going to get much for peas once again. I just can't seem to get my timing right on it. 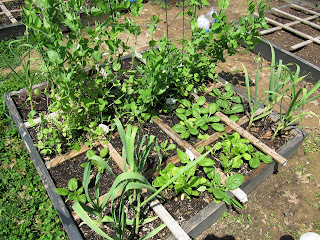 I am feeling pretty much behind on everything. Things either just don't seem to be germinating, or I am getting them started too late or both! Tomatoes and peppers are one of them. The tomatoes took a while to germinate and are quite tiny and the peppers don't seem to be germinating at all! Hmmm. I began putting a bunch of the seeds in wet paper towels and in a baggy to get them germinated, and those seem to be doing better, but behind! It's always something to work around every year isn't it? I am sure I will get stuff out of them, just later than I had hoped. So far, the items growing the best are the onions and the garlic.
Posted by Shawn Ann at 2:42 PM 1 comment:

So I have my seeds out, my graph paper out, books, etc and I am making layouts and gluing carrot seeds to napkins (as suggested by Annie's Granny). This did not work out well for me last time, but I am going to give it a shot again and hope it works. I think it was just too hot and dry last time. 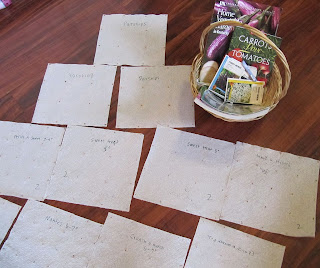 Over the weekend DH filled my 2 new boxes and I began transplanting and moving things around. He topped everything off with a little bit of Zoo Poop! Composted of course! We'll see how the zoo poop works for us. Every year in the spring the Louisville Zoo has it's "Zoo Poopy Doo" event to sell compost and mulch as part of a celebration for the Earth. This year is April 2, 9, and 16 if you want to get in on it.
It's all wet and muddy out in the garden right now though. I drew up the layout and where I am planning to plant everything that can be found under Garden Layout and Plans  <--here or above. It won't be long and it will be all filled in! Hooray for spring! Even rainy days...

As I am preparing for the new gardening season, making charts, planting seeds, and more, I have been putting some of my favorite resources to work. One of my favorites is the Kentucky Gardener magazine, I love the "how to's" and the reminders of what do and when for specific plants. I often stock up on ones the library throws out after it gets a new supply in! Gardening tips are rarely outdated! And, I just got a subscription as a gift, and I couldn't be more excited! Especially since you can only check out the previous month's edition at the library, it doesn't help too much now when you are reading Marches edition in April! Still, I am glad my library carries it, or I would not have known what a wonderful resource it is. 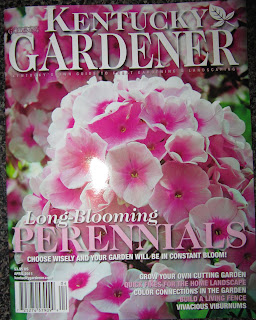 Another invaluable resource to me has been the UK Cooperative Extension Service and the publication that they put out, "Home Vegetable Gardening in Kentucky."(Louisville) It has everything from how to start your beds to dates and charts to insects and diseases that often do their damage in Kentucky! I have the book folded open to the seed starting charts at this time! I have noticed them offered all kinds of places, including the Y.  There is also another publication that is put out around Lexington, "Home Vegetable Gardening in Kentucky."(Lexington)
And of course the University of Kentucky Insect Files has helped in identifying the good, the bad, and the ugly of our area.
My friend has also let me know about a group called 15Thousand Farmers, I have checked out their website and signed up, but have yet to visit one of their meetings. But it looks like a great program that gets lots of local businesses involved and offering discounts on gardening supplies! I don't know about you but I could always use a discount.  They also have workshops, seed trading and all kinds of help and information for growing your own food.
I could list several more invaluable resources that I like to use, but this is all about Kentucky! If you know of good Kentucky resources, I'd love you to share.
Posted by Shawn Ann at 7:44 PM No comments: 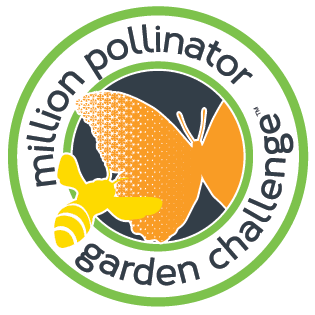 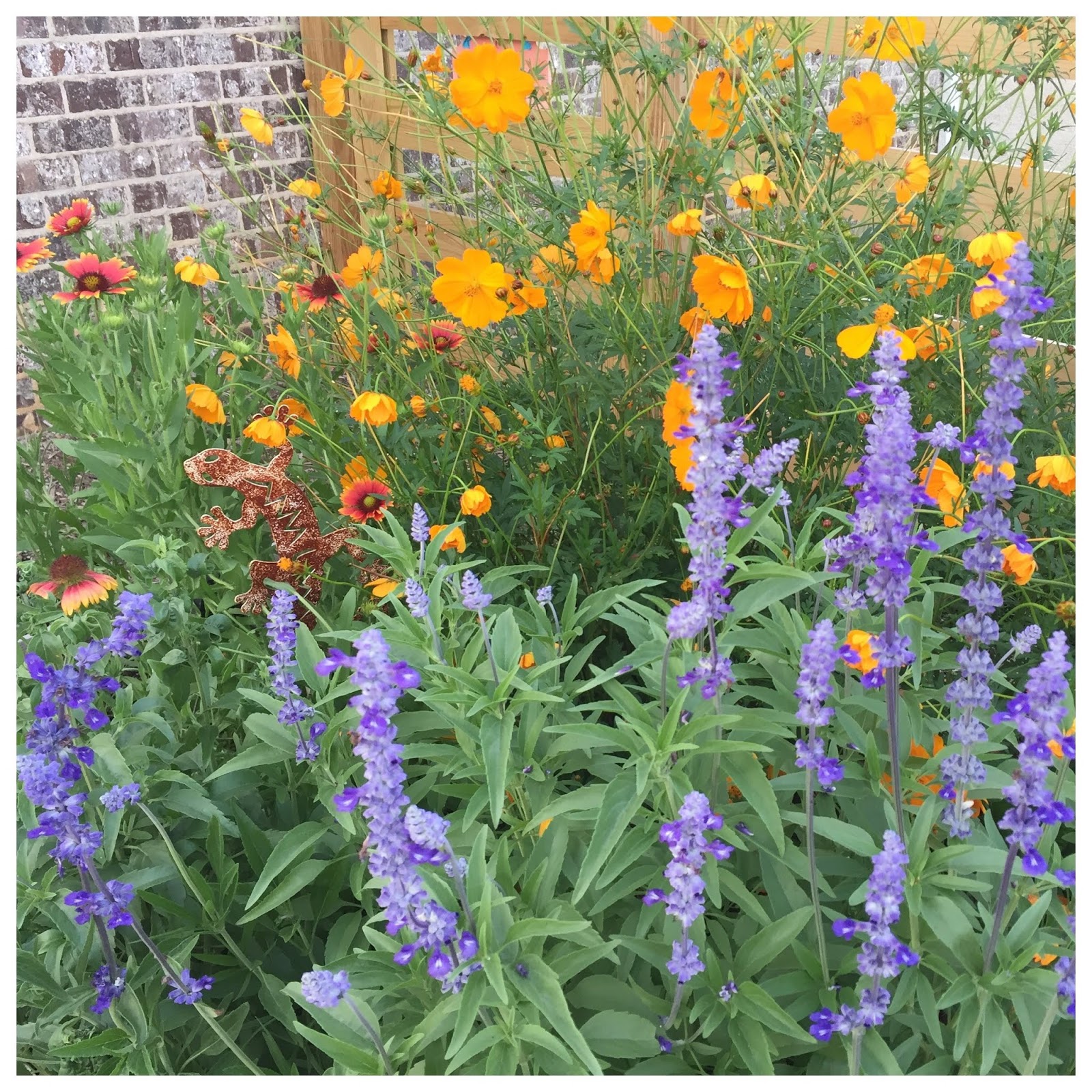 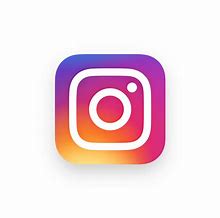 Welcome to our KY Garden!

We are in upper zone 6. We enjoy edible gardening, flower gardening and Square Foot Gardening. We moved to a newly built house in late 2016. We did our own landscaping (except for the grass). We would love to share our progress with you and all we learn. We also enjoy cooking for our family, we have 3 children that love the garden and the treasures that come from it! I also enjoy growing flowers and attracting beneficials to the garden. We try to garden organic as much as possible.
I have not blogged regularly for a while and below is the reason why:
At the end of 2014 my journey with MS (multiple sclerosis) began. It has made me exhausted and unable to keep up with both blogging and garden upkeep. I love my garden so much. I haven't let it go. I have reduced it a tiny bit, but not too much. I refuse to give up something I love so much and makes me feel so accomplished, as well as joy. Please bear with me.